Atlantis is the Sardinian-Corsican block submerged by the succession of the various meltwater pulses, ie the melting of the ice after the last glaciation, called Wurm. The capital would have its center on a hill near the small town of Santadi, in the province of Cagliari. 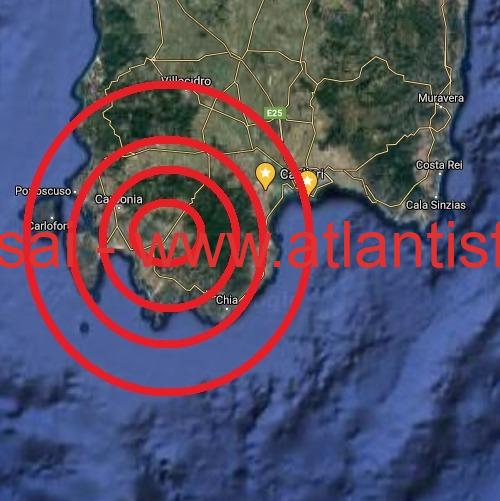 Atlantis would be the Sardinian-Corsican block submerged by the succession of the various meltwater pulses, ie the melting of the ice after the last glaciation, called Wurm. The capital would have its center on a hill near the small town of Santadi, in the province of Cagliari. Starting from the hill next to Santadi, it’s possible to see the perfectly circular development of all the town planning. There are also many toponymic references to the myth of Atlantis, including the two hot and cold water sources placed by Poseidon: the cold water source of Zinnigas, which still remains today also in the name of the “Castello d’Acquafredda” di Siliqua (Coldwater Castle), and the hot water source, present in the toponymy in three neighborhoods next to the small town of nuxis, still called “Acquacadda” (Hotwater), “S’Acqua Callenti de Susu” and “S’Acqua Callenti de Basciu” (Upper hotwater and Down hotwater), which are small villages next to Santadi.
Also present in the toponymy adjacent to the small village of Santadi is the name Sais, the name of an urban fraction called Lower Sais and another called Upper Sais. Sais is in fact the same name of the Egyptian city where the priest Sonchis taught the famous Greek politician Solon the story of Atlantis, according to Plato’s account.
Incredible archaeological discoveries have also been made in the caves near Santadi. In the Su Benatzu cave, extraordinary finds have been made of finds still under study. Archaeological excavations at the Su Montixeddu cave, located in the urban hamlet of Acquacadda, have revealed human settlements very remote over time.
The Necropolis of Montessu, near Santadi, has Egyptian and Atlantean symbols: the Atlantean concentric circles are the symbol of the Capital of Atlantis, built according to concentric circles. These circles are carved into the rock, visible and famous, on the walls of the necropolis. There are also sculpted drawings of the ships in use at the time by the Egyptians; this would be further proof of the connection between the Necropolis of Montessu in Santadi and ancient Egypt.
Furthermore, the tridents of Poseidon, who according to legend founded the capital of Atlantis, were found carved in the rock in the village of Laconi. The tridents carved in the rock are still visible today at the Menhir Museum in Laconi, in the province of Cagliari.

Atlantis exists! Found by Dr. Luigi Usai > Blog > Atlantis-found-and-archaeology-news > Atlantis is the Sardinian-Corsican block submerged by the succession of the various meltwater pulses, ie the melting of the ice after the last glaciation, called Wurm. The capital would have its center on a hill near the small town of Santadi, in the province of Cagliari.
We use cookies on our website to give you the most relevant experience by remembering your preferences and repeat visits. By clicking “Accept All”, you consent to the use of ALL the cookies. However, you may visit "Cookie Settings" to provide a controlled consent.
Cookie SettingsAccept All
Manage consent