The central role of the Sardo-Corso Neolithic naval superpower in the Mediterranean: Contains the exact location of Atlantis, its capital, toponymy and migrations Paperback – July 8, 2021 by Luigi Usai (Author) 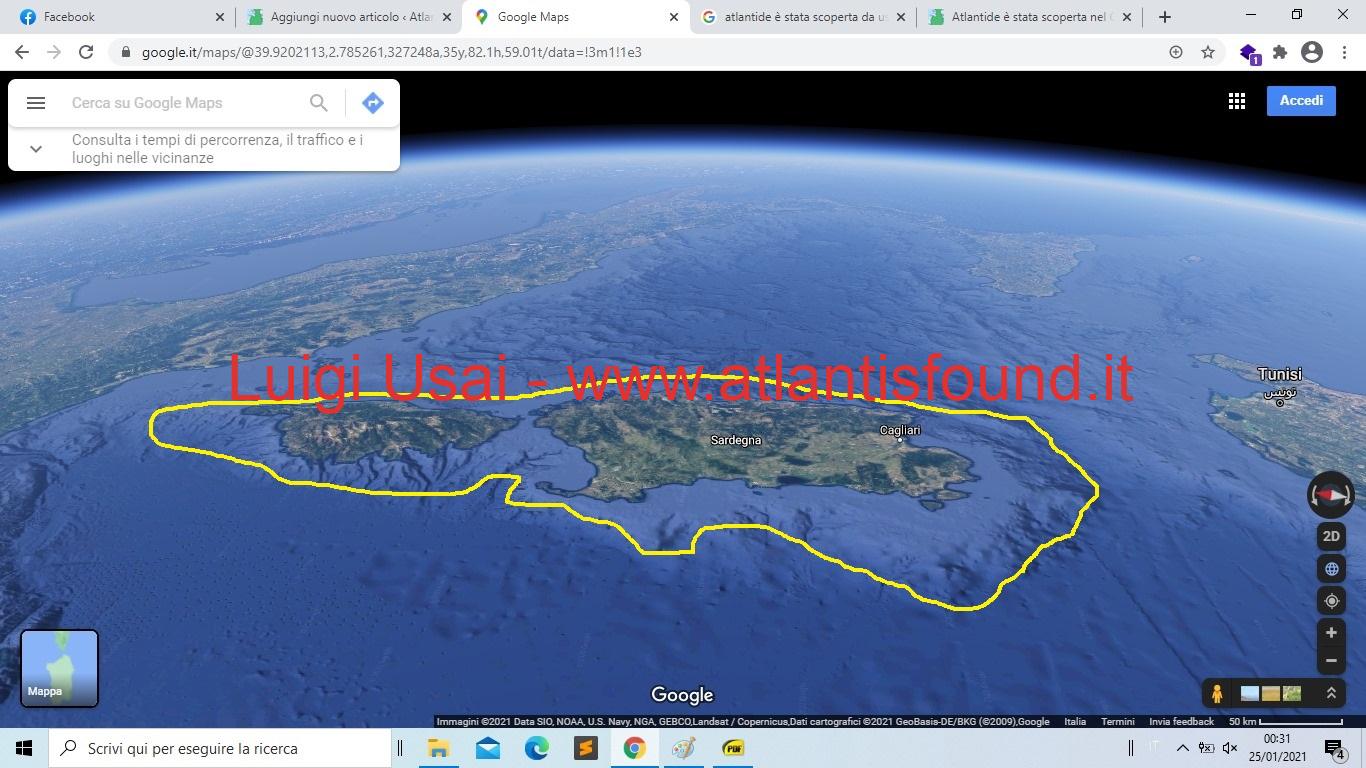 The central role of the Sardo Corso Neolithic naval superpower in the Mediterranean: contains the exact location of Atlantis, its capital, toponymy and migrations Paperback – July 8, 2021
by Luigi Usai (Author)

Atlantis is the Sardinian Corsican continental block currently partially submerged. Its capital is not what we now call “city”, but what we now call “province”: Sulcis Iglesiente. Under the Sardinian Corsican block passes a tectonic subduction zone which was perhaps an efficient contributor to the sinking of this ancient sacred island, together with the various Meltwater Pulses. From satellite it is currently possible to see only part of sections of concentric circles: after about 11,600 years have passed. The outer rings of land have collapsed and sunk, and only those that today appear to be islands remain as evidence of them: S. Antioco and Carloforte. The tectonic subduction ridge is the same that continues up to Vesuvius, and which caused the famous destruction of Pompeii and Herculaneum. Like a domino effect, the discovery that Atlantis exists causes other discoveries in a chain. In this text it is shown that the city of Troy was a Sardinian Corsican colony, exactly like Göbekli Tepe, like the Minoan civilization and that of the mysterious people of the Guanches. The discovery of Atlantis causes an upheaval in current knowledge and forces us to rethink all of prehistory, along with many other disciplines, from geography to aesthetics, from history to anthropology, from linguistics to hydrology, archaeobotany, archeology, anthropology, sociology. .. Geography, for example: the Atlantic Ocean of which Diodorus Siculus spoke was none other than the Sardinian Sea. Cagliari was originally called Kerne and was founded by Annone the Navigator. Atlantis was sentenced to Damnatio Memoriae. That’s why “Carthago delenda est!”: because, as you can learn by looking at the architecture of the port of Carthage, it was a Sardinian Corsican colony in Africa. The Temple of the Sun in Nineveh is also built with Atlantean architectures, while the aesthetics of the whole planet have been invested by Atlantean tastes: there are everywhere examples of concentric circles, symbol of the now forgotten capital, on vases, amphorae, buildings, menhirs . This affirms the Sardinian Corsican paradigm as a unique point of view from which to look back at all events, in order to place them in the right place of history. The text then shows the incredible quantity of Atlantean toponymy spread throughout Europe up to the Canaries and the contacts between Egypt and Scotland by the Sardinian Corsican Atlanteans; all without claiming technical and scientific perfection, as all these discoveries are only a first insight, which must be followed by hundreds of years of studies and research. Finally the megalithic civilization has a rational explanation: the Sardinian Corsican Atlanteans have arrogantly and forcefully colonized the whole world, expanding to infinity and exporting their construction techniques and their civilization and culture, including the use of making megalithic constructions. But in particular they exported the language: in Atlantis there are many linguistic varieties today called “minority”, and this explains the diversity of the languages ​​of every region of the world. The Iliense dialect was different from the Belares dialect and that of Uta, Samassi and Sinnai . From the variant of Sardinian taught, the various languages ​​of the colonized world were born.

Atlantis exists! Found by Dr. Luigi Usai > Blog > Atlantis-found-and-archaeology-news > The central role of the Sardo-Corso Neolithic naval superpower in the Mediterranean: Contains the exact location of Atlantis, its capital, toponymy and migrations Paperback – July 8, 2021 by Luigi Usai (Author)
We use cookies on our website to give you the most relevant experience by remembering your preferences and repeat visits. By clicking “Accept All”, you consent to the use of ALL the cookies. However, you may visit "Cookie Settings" to provide a controlled consent.
Cookie SettingsAccept All
Manage consent